If you have previously followed Damian Mee’s initial setup guide, you can simply run:

As of 2015, Facebook has overtaken Google as the main source of traffic to news sites[1]. The average Facebook user spends 40 minutes a day on the site[2]. If we fail to archive news feeds we will lose important sociological information.

The Internet Archive does a great job of archiving the web, among other things like VHS tapes. They’re located here in The Richmond and you can go visit them on Fridays during lunch[3]. I’m concerned that while they are doing a great job of getting the data, they’re missing really crucial metadata, i.e. feed presentation.

The Wayback Machine is necessary but not sufficient for a full representation of the state of the web as it is experienced by real people. If you really want to understand the zeitgeist of today, January 17, 2017, you wouldn’t want to only see the front page of the NYT. You’d want to experience the web mediated through individuals’ news feeds. I imagine a good number of researchers would like to sample feeds in the years leading up to the 2016 presidential election.

I see there is a chrome extension that can be used to archive a feed, but I haven’t seen anyone scraping feeds at scale over time. Imagine a sort of opt-in system where volunteers give archivists read-access to their social media accounts. With a few hundred opt-ins you could get a decent sample of all the different cultural/subcultural bubbles.

The obvious candidate to solve this problem is Facebook itself. They might already have a feed time machine internally! Contributing a few hundred feeds (and appropriate developer time) to the Internet Archive would be a great move and a PR win.

[3] If you live in San Francisco you should go do this. You will have fun and meet some interesting people.

Google has advertised the Nexus 5X around San Francisco, claiming a high quality camera. Here’s what the photos look like in practice.

A series of stale wikis and forum posts complicate the setup for cross-compiling code on OSX Yosemite 10.10.4 and running it on a MSP430G2231 microcontroller. It’s not hard if you know what to do.

Today, the fastest way to get code running on an MSP430 is Energia, an Arduino-like environment with a specialty language and purpose-built IDE. It’s actively maintained and seems to just work which is more than can be said for anything else in this ecosystem.

If you want to write vanilla C with no magic you need to set up the toolchain and debugger yourself.

If you launch mspdebug you won’t find any devices because you’re missing the usb driver.

2. Install the MSP430LPCDC-1.0.3b-Signed driver from the Energia site.

A restart is required. Afterward, try `sudo mspdebug rf2500` and you should be able to get a shell and see output like this:

You’ll have to create an account and swear you’re not Libyan, among other things. Install the compiler using the wizard and remember the destination path.

4. Create a project folder with some source code. There are some examples in <GCC_INSTALL_DIR>/examples/osx.

I tweaked one of the examples to work specifically for the MSP430G2231. Put them in the same folder.
blink.c
Makefile

5. Build the project with `make`. This should run some commands like this:

6. Copy the compiled program to the board.

7. Run the program with `run`. The red and green LEDs should alternate blinking.

Bonus fact: since the MSP430 has memory-mapped I/O, you can turn on the LEDs from the debugger with the `mw` command. Consult the appropriate header file in `<GCC_INSTALL_DIR>/include` to find the address of P1. For me, it’s 0x0021.

In The Dark Knight (2008), the Joker destroys a large pile of cash by setting it on fire. This demonstrates the Joker’s commitment to nihilism but raises a much more interesting question: What is the deflationary effect on Gotham’s economy?

To answer that we need to know if the money was actually going to be spent.

Before the events of the film, newly elected District Attorney, Harvey Dent, has spearheaded an anti-money laundering campaign but has failed to halt the business of the mob which has access to a few crooked banks under the control of Chinese financier, Lau.

Batman helps his cop friend Gordon identify Lau’s banks via drug purchases with marked bills. Lau’s banks are performing two types of services. The first is exciting: money laundering. The illicit local deposits in Gotham are “layered” by being sent to Lau’s company in Hong Kong and then “integrated” by being paid back to Gotham gangsters. The mob spends this money on the ostensibly legitimate parts of their business like real estate, capital goods (trucks, cement), and payroll which is spent on consumer goods (cannoli).

The other type of service the banks perform is boring: commercial banking. The mob’s deposits are on the books as cash reserves and count toward reserve requirements held against business loans, car loans, and mortgages for the general public. Easy credit helps businesses grow and is great for consumer spending.

Lau’s corrupt cops tip him off to Gordon’s raid and he explains to his ethnically diverse cadre of gangsters that he has moved the deposits to a secure location that is “not a bank”. This is bad for the general public. If the mob is unbanked, there’s slightly less credit available for the people of Gotham.

Remember that the film is set in 2008 which happens to be the beginning of the financial crisis. Gotham needs all the cash it can get.

Later on, the Joker kidnaps Lau and forces him to give up the non-bank location of the money. We see Lau tied up in a chair atop a mountain of cash. Assuming a billion dollars in hundreds is about two pallets, the total value of cash mountain is on the order of 10 billion dollars. Note that Batman had already forced Lau to withdraw the money from the banks so he shares some culpability for the deflation, at least in the short term [1].

Is this a meaningful reduction of the money supply?

From December 2008 to March 2010, the Fed bought $1.7 trillion of Treasurys and mortgage-backed securities [2]

You can sort of see that here in the dark blue line. Notice the vertical axis is in trillions of dollars [3]. 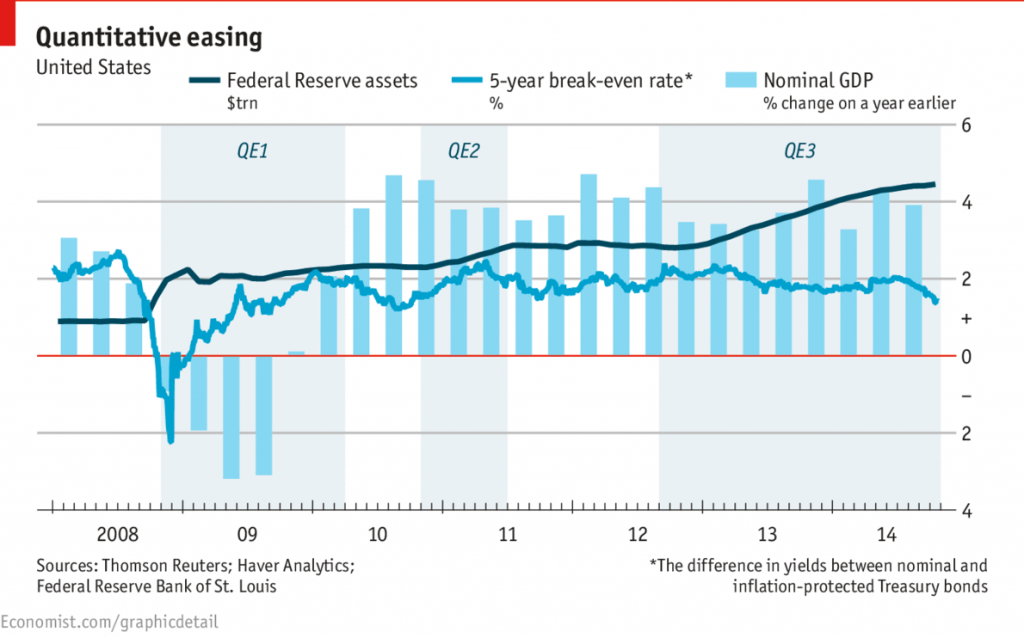 So $1.7T over 15 months is $113B dollars a month. The Joker burned less than a tenth of that in the warehouse which isn’t terrible.

There’s also fallout from dismantling the mob that’s hard to quantify. A nontrivial number of henchmen, goons, and thugs will be out of work if Batman gets his way. These people will have a hard time transitioning to the legitimate economy which systematically practices de jure discrimination against anyone with a criminal record.

But at the same time, the removing the presence of the mob in Gotham lowers costs of doing business for everyone else. If the Taco Bell franchise has to pay protection, it can’t hire a guy to keep the drive-through open on weekends. All told, the mob is probably a net negative for the local economy.

Okay, so burning a few billion dollars isn’t enough to cause serious monetary damage. In fact, it pales in comparison to the non-monetary effects of the Joker’s campaign. Terrorism hurts growth in 2 ways, says the IMF [4].

In summary, Batman’s decision to take out the Joker has a sound economic rationale. He’s firmly on the side of growth. See if you can spot the omission in Gordon’s closing remarks.

he’s a silent guardian, a watchful
protector… a dark knight.

What he didn’t say is that he’s a protector of markets. Which isn’t surprising given Bruce Wayne’s nominal day job.

[1] Had the total amount been seized by the police under asset forfeiture laws, the cops would get to keep up to 60% for new toys while the remainder goes to the New York state treasury. https://www.ij.org/asset-forfeiture-report-new-york